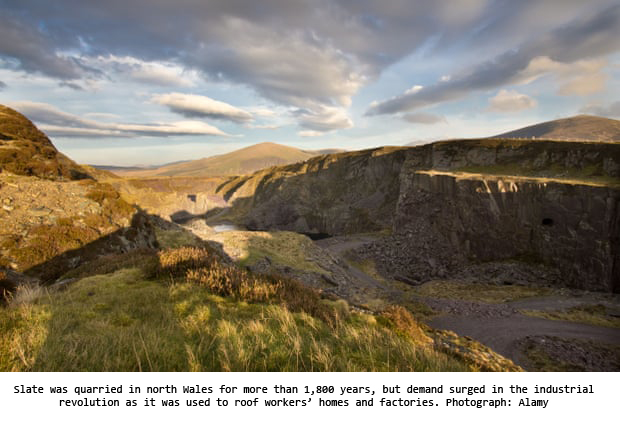 An extraordinary landscape shaped by many centuries of slate production has been nominated by the UK government for Unesco world heritage status, a distinction enjoyed by sites such as the Taj Mahal, the Great Wall of China and Stonehenge.

The production of slate in Gwynedd, north-west Wales, has left a landscape dotted with underground workings, terraces cut into hillsides, grey, towering tips and bright blue pools, all nestling within mountains and woodland.

It includes cottages for quarrymen and their families, chapels, band-rooms, libraries, great houses for the wealthy industrialists and railways that in their day were great feats of engineering.

The hope in north Wales is that Unesco status would help preserve the landscape and draw more visitors to an area that was once called the place that roofed the world.

The heritage minister, Helen Whately, who submitted the formal nomination to Unesco, said: “The incredible slate landscape is hugely significant to north-west Wales and its industrial heritage. The slate from the mines continues to have an influence on architecture around the world.

“This nomination is an excellent way to recognise the importance of Wales’s slate mining heritage and will bring benefits not only to Gwynedd but the whole of north Wales by attracting visitors, boosting investment and creating jobs.”

If accepted, the landscape will become the UK’s 33rd Unesco world heritage site and the fourth in Wales, following the Pontcysyllte aqueduct in north-east Wales, the castles and town walls of King Edward I, also in Gwynedd, and another place shaped by industry: the Blaenavon industrial landscape in south Wales. Slate was quarried in north Wales for more than 1,800 years and was used to build parts of the Roman fort in Segontium in Caernarfon, but in the industrial revolution demand surged as cities across the UK expanded, with slate widely used to roof workers’ homes and factories.

By the 1890s the Welsh slate industry employed approximately 17,000 and produced 485,000 tonnes of slate a year. Welsh slate was used on a number of buildings, terraces and palaces across the globe, including Westminster Hall in London, the Royal Exhibition Building in Melbourne and Copenhagen City Hall. The slate from north-west Wales works so well because it is light, long-lasting and impermeable. Slate is still worked in the area, though on a much smaller scale.

The area will now be considered by the International Council on Monuments and Sites over the next year before being considered for inscription at the World Heritage Committee meeting in 2021.

The Welsh government deputy minister for culture, sport and tourism, Dafydd Elis-Thomas, said: “We are delighted that the slate landscape of north Wales will be put forward as the next UK nomination for inscription as a world heritage site. Wales has a unique and varied industrial heritage that is rightly celebrated. “This nomination provides further recognition of this outstanding landscape – of something which is rooted in our own geology and culture but has global significance.”

Champions of the area say it is not just the landscape that is important but the memory of those who lived in it – people who mastered challenging skills to earn a harsh, precarious but good living, and raise families in an often difficult environment.

Councillor Gareth Thomas, Gwynedd council’s cabinet member for economic development, said: “More understanding of the significance of the Welsh slate quarry industry and its role – not only in shaping our communities, language and culture, but also in roofing the world and exporting technologies and people globally – is needed.

“Not only is the bid helping to celebrate and recognise our unique culture, heritage and language, but it will also open the door for economic regeneration across the area, including the existing quarrying industry, traditional and craft skills, along with looking to create sustainable tourism and high-value job opportunities in Gwynedd.”

Other Unesco world heritage sites in the UK include the city of Bath, Blenheim Palace, the Cornwall and west Devon mining landscape, Ironbridge Gorge and the English Lake District.