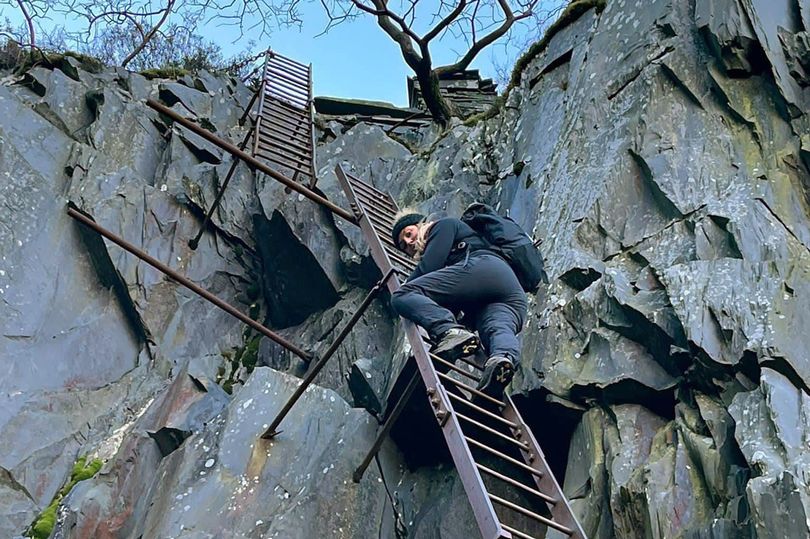 Navigating Dinorwic Quarry can be done the easy way or hard way. An increasing number of people are choosing the latter, heading for Mordor via the Lost World using a series of rusty ladders and iron chains that disappear into hanging tunnels.

In between lies secret passages, unforgettable views and a void-bridging tramline, now sadly collapsed. The route has been dubbed Snakes and Ladders, a mountainous assault course with attitude that uses equipment left behind by quarrymen more than 50 years ago.

The 700-acre site offers any number of routes but to earn their Dinorwic stripes, climbers must tackle Snakes and Ladders. Along the route, Snowdon (Yr Wyddfa) lurks in the background, while Llanberis and Llyn Padarn lie far below.

This is a challenge not for the faint-hearted and climbing competence is a must. Snake descents require abseiling expertise and climbing the rickety ladders is not to be undertaken lightly. Novices can climb and slither but only with an experienced guide.

Last weekend Cheryl Bennett, 36, a special needs teacher from Cheshire, took advantage of the fine weather to tackle part of the course. Accompanied by a route veteran, she climbed a triple set of ladders, explored the quarry’s “secret” tunnels and even perched on a suspended tramline that once offered a perilous trip across a gully of slate scree.

“It was my first time and I was in love with it,” she said. “It really was a beautiful day, with gorgeous scenic views.

“The ladders were actually really steady. I felt scared at first, but I was with a friend who had climbed them before so was aware they were safe. I climbed all three levels, no problem.”

At its height, Dinorwic was the world’s second-largest slate quarry after neighbouring Penrhyn near Bethesda. They were – and can remain – dangerous places: between 1784 and 1965, a total of 474 men were killed in accidents at Penrhyn quarry.

Since closing in 1967, Dinorwic has been discovered by climbers and tourists, and a trail now leads visitors around the place. Over time, scores of smaller paths have been fashioned by walkers intent on exploring a quarry that is always slow to reveal its secrets.

One such path leads to Dali’s Hole, from which a hidden tunnel opens out into the California gallery. Here lies the first challenge, and one of the trickiest – climbing a thick chain, stained red with iron oxide, that dangles from a hanging tunnel high up on the quarry face. For some, it’s reminiscent of PE lessons, only much tougher.

More obstacles await, including a squeeze through a boulder-blocked hole that can leave the unwary temporarily disoriented by its inky darkness. Or you can bring a headtorch.

This leads to another section of Australia, one of the quarry’s busier climbing areas. To reach its top requires a deep intake of breath and an ascent up several ladder sections. As these lie against the rock face at different angles, moving from one to another is an ultimate test of nerve.

Can any other challenge in Snowdonia beat this?

At the summit lies a plateau that offers spectacular views across Snowdonia (Eryri). Still there are old quarrymen’s buildings containing evidence of their labours, from hanging coats and to leather boots laid out for the next shift.

From here a path leads to the Lost World, a strange, ethereal place that’s far less busy than California. Reaching the bottom involves several “snakes” via a series of abseils and ladders.

A rockfall has hidden part of its base, smothering its trees and vegetation. At its lowest point, there’s a tunnel leading to Mordor, an echoing place pockmarked by cliff tunnels and multiple ladders. The longest leads to the top and the “bridge of death” – the now collapsed tramline that once offered a final challenge for the foolhardy. For a Gram-friendly image, Cheryl perched on one end of the shattered tram track. To enjoy the place doesn’t require adrenaline, she said. “You can just take the pathway trail around the quarry if you want a stroll with kids or dogs,” said Cheryl.

“If you want to explore, like we did, you can turn off the trail. We just kept looking out for Lake Padarn on the bottom and knew we were ok – we didn’t feel lost at all. The caves were great to explore and to find all the beautiful hidden secrets each contains.”

Now is a good time to visit. The National Slate Museum in Llanberis is celebrating its 50th anniversary this year and the Slate Landscape of north west Wales was recently granted World Heritage Status by UNESCO.

Visitors wanting to explore Dinorwic quarry can park at Padarn Country Park and take the Zig Zag path up the mountain, which in itself offers wonderful views. For a quicker route, some choose to park at Dinorwic bus terminus, but it can get busy here.

A must-see attraction is the spectacular ruins of Anglesey Barracks, two rows of 11 cottages just outside the main quarry. These were built in the 1870s and provided squalid housing for quarrymen who lived too far away to return home each night.