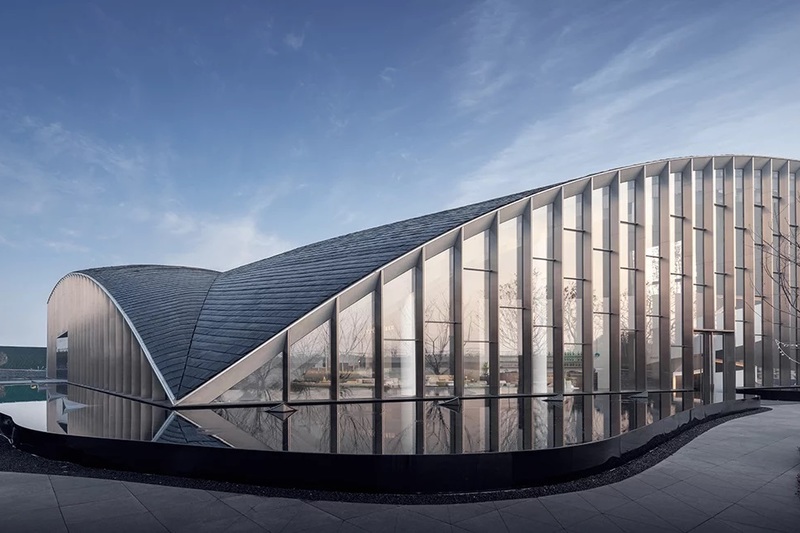 Jiangnan culture is known for its poetry, literature and arts. With a region characterized by serene hills and lakes, the new intervention by Lacime Aims to unite a functional program with this delicate, poetic spirit.

The functions are arranged around a central enclosed courtyard space, harking back to traditional chinese architecture. One corner of the volume bends down over the water, extending into the surrounding landscape to represent ancient chinese culture by underscoring the unity between heaven and earth, while giving the building a light and dynamic appearance. The façade is designed with huge floor-to-ceiling glazing and a number of long curtain wall columns to resemble traditional wooden grating and achieve a visual connection between the indoor and outdoor environment.

The roof is clad with slates commonly seen in southern China. The selection of this material highlights the simple yet elegant architectural language of jiangnan, while the natural texture provides an effective contrast with the light and transparent glass curtain wall. Stainless steel columns order the main façade, and to reduce construction cost, the elevation is segmented. In these segments, stainless steel perforated plates have been installed to make the façade look more refined.

To make the stainless steel columns of the main façade appear thinner, a trapezoid cross section has been used utilized. The outermost width is only 5cm, and along with a grooved design, it delivers a thinner and more refined look. simple and pared-back colors are reflected in the surrounding water, bringing a sense of tranquility.

Ultra clear glass is used for the façade, huge and transparent. Sunlight floods the indoors in the daytime, while at night the elevation illuminates the park. in the interior, industrial metal plates are combined with graceful curves, which are adopted to convey the poetic features of Jiangnan. Aside from the traditional aesthetics of Jiangnan, new materials and new techniques have also been applied, resulting in a contemporary building that harmonizes with the local history and culture.