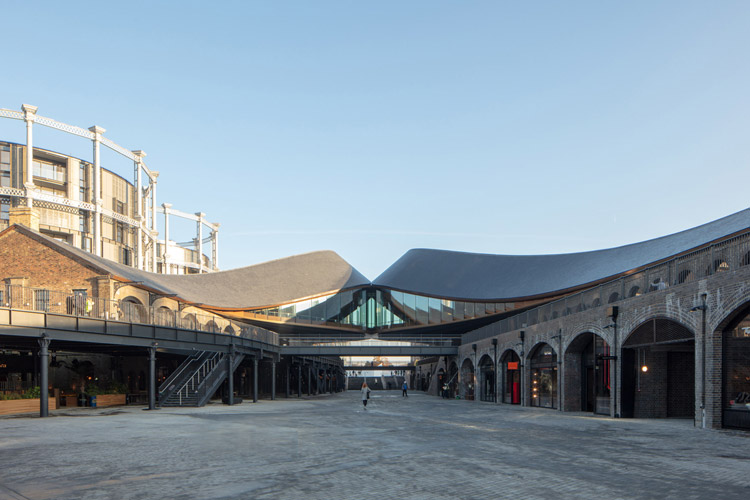 Designed by Heatherwick Studio, the Coal Drops Yard contains shops arranged in two converted 19th-century coal warehouses, connected by roofs that curve out to touch each other. Between the two linear buildings is a publicly accessible space.

«Coal Drops Yard is a new major public space for London, which is framed by retail, so it’s like a new shopping street,» Heatherwick says in the video.

«Our job was to make a new public space for London. This area has been transformed over the last 18 years from a place that was closed off and not accessible,» he says.

«We hope that this will be a new heart for the district.»

Like the adjacent art school and apartments, the Coal Drops Yard shopping centre is built within a historic industrial building.

«It’s been made from two Victorian structures, which originally were the ends of [the railway] lines that went all the way up to the north of England to the coal mines,» explains Heatherwick.

Heatherwick Studio connected the two Victorian buildings by extending the form of the roofs towards each other so that they touch above the central space.

«In the centre, the two main linear structures are stitched together with a new level with 20,000-square-foot of new space. The roofs are made from the same slate of 170 years ago, from the same seam in Wales in order to make this sort of kissing point where the two buildings touch,» the designer continues.

«There’s a new, quite major engineering, technical solution in making column-free structure that leans, and holds itself, and fuses together, and then comes back into the existing linear structures.»

The shopping centre is Heatherwick’s first major building in London. His studio is currently also working to turn London’s Olympia into cultural hub.