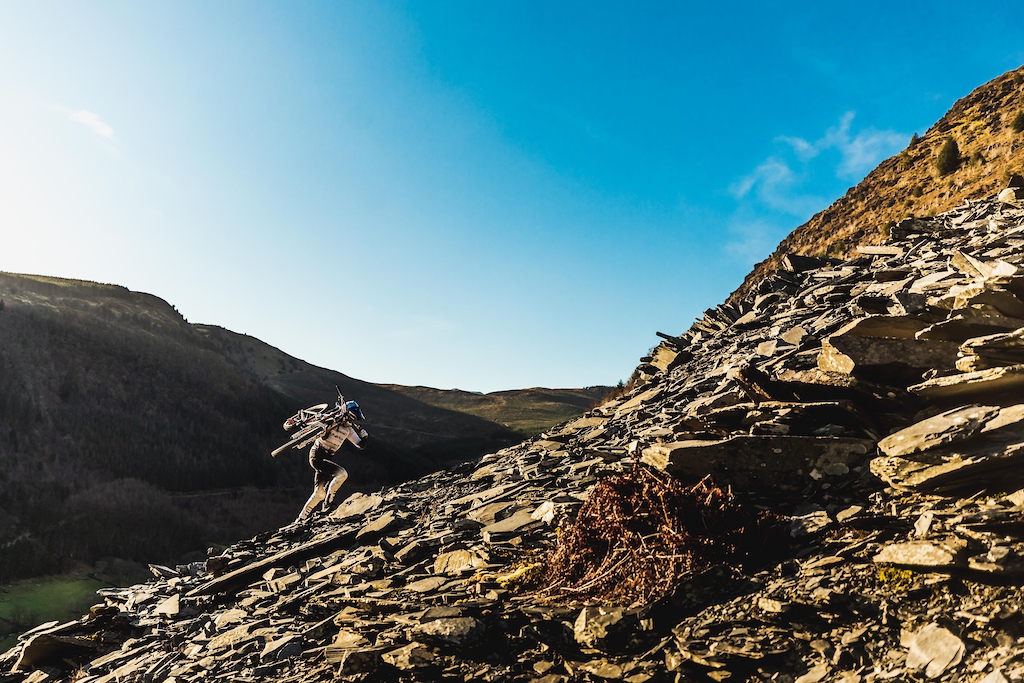 Following hot on the heels of the spectacularly exposed “The Ridgeline” Gee tackles a brand new line at a disused slate quarry in Wales.

In his constant quest to progress the sport, Gee sets out to conquer a moving mountain with one of the biggest gaps he’s ever jumped and a super-sharp surface where any mistake will not be forgiven.

These images by Dan Griffiths capture the mental and physical processes involved in producing and riding such a line and some next-level bike handling in a uniquely brutal setting. Scoping: Gee says he’s driven past this mountain hundreds of times but dismissed it as impossible. Then one day in January, Gee and Jamie Robertson – Gee’s right-hand man on the dig crew – got out of the truck and hiked up… The next stage was to go up there with the full dig crew. “You have to wait for the line to show itself…» «Possibilities slowly crawl out of the mountain, segment by segment. The crew I work with are all great riders and creative builders, I rely on them a lot to keep me in check with honest feedback.” «Projects like this escalate. The initial plan was to go up, scratch some kind of line and blast down the mountain… in the end, we dug for 6 weeks.» «When I know that I’m going to have to bring my A-Game it weighs heavy in the weeks leading up to that first ride. I wake up at night thinking about it, it’s the first thought on my mind when I wake up in the morning…» «But there was a moment at the start of testing when I looked up and I saw the whole mountain above me and I knew it was possible.» It was a completely unknown quantity, compounded by the fact that rocks would constantly move, dislodged by the rain, footsteps or by work at a different level. Gee said “There were times when we’d work for hours or even a couple of days then someone would say «It’s going to be too dangerous…» abandoning the work we’d put in during the bleakest conditions was brutal.” It’s a pretty eerie place with a lot of history. It was more than just the physical danger (though Gee said he spent the first week “genuinely scared” of tumbling off an edge into a 400-foot mine shaft. At the bottom of the run there are three small, stone buildings. It turns out that one of these is the mortuary. Over 200 men have died here in the cause of their work. Gee said «I was so glad that nobody told me about this before we’d finished filming.» There has been quarrying here for hundreds of years, the mountain is literally hollowed out by caverns. It’s believed that the first slate was mined here as early as the 14th century. Thanks to Andy and Janice Taylor for loaning the map. “After a few weeks you definitely acclimatize to the environment – we noticed it most when anyone new came up.” “Of course it’s easy enough to say you’re not scared when you’re on foot… as soon as you swing your leg over bike it’s a different story.» «As soon as you drop in the whole surface of the mountain starts to flow downwards, dragging you with it… super sharp fragments battering the bike as you go.» The hike up was brutal. Going down was tough but getting back up was no picnic either. «When you’re in the quarry it’s pretty quiet, there’s an occasional crow and the faint noise of the open workings across the valley but it’s the shattering of slate underneath your wheels that really breaks the silence.» «The entire line is steep, rough, sharp, and totally gnarly, dropping 310 metres in about 360 metres of track. That averages out at about 40 degrees, though in parts it’s much steeper.» On this type of terrain you don’t have the option to session the track over and over so it was important to get the capture every angle that we could. The entry to this drop was a really awkward traverse before a heavy fall to flat. There was no opportunity to slow down through this corner, Gee said «I’m just going to close my eyes and send her through the gap.» We spotted a gap through the old freight workings… …but the landing sent Gee through a ridiculously small gap… …off-camber and flat out, just inches from a wall that could slice his fingers off. 81 feet is one of the biggest gaps Gee has ever hit. “The first time I hit it I went so deep I came down on the second half of the landing. It felt like I was in the air for a very long time!”