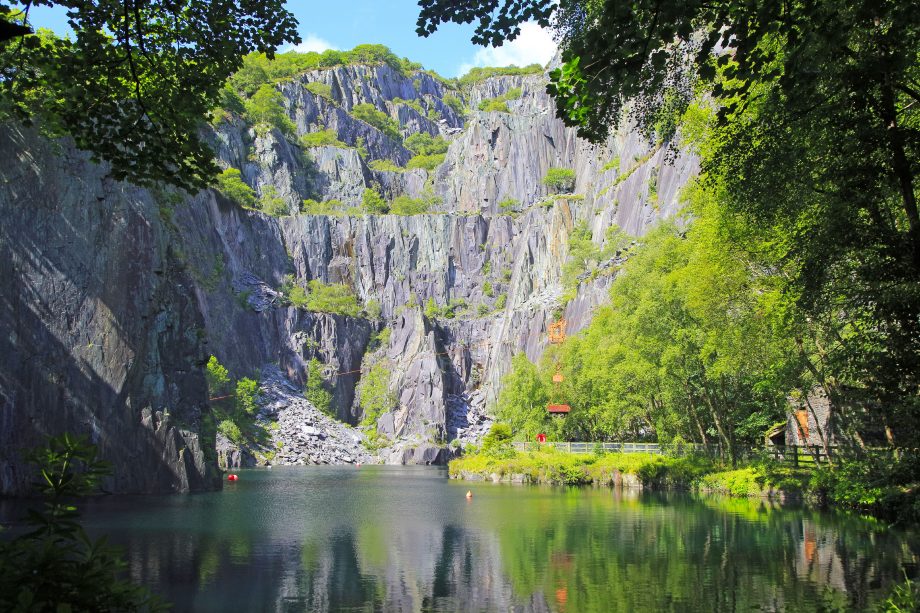 Silenced Welsh quarries evoke a vanishing world for Fiona Reynolds, as she goes walking through Snowdonia.

A year ago, six areas of the North Wales slate landscape were awarded coveted World Heritage status, to recognise the extraordinary remnants of the once-great Welsh slate industry. How times have changed. When Snowdonia was designated a National Park in 1951, the slate workings in Bethesda, Llanberis and Blaenau Ffestiniog were deliberately left out, believed to be too damaged to be worthy of note. Today, the dramatic quarries are celebrated and their stories widely told, although they are not comfortable stories.

We’ve been visiting Snowdonia all our lives: as a child, I visited Llandanwg, near Harlech; my husband (and me since our marriage 40 years ago) a tiny cottage across the lake from Llanberis. When I’m there, I walk through the Dinorwig quarries every morning, thinking of the quarrymen walking to work at the crack of dawn or housed in barracks in the heart of the mines. Spurred on by the new World Heritage designation, we spent our week in Snowdonia this summer exploring the slate landscape. I’m left with vivid memories of two very different walks. The first is a variation on my morning stroll, to experience the dizzy heights and spectacular engineering of the paths through Dinorwig quarry. I walk (with Ruskin, my labrador, of course) through the maze of old paths threading the Fachwen woodlands, connecting a myriad of small cottages, heading for the mines. We emerge at the far end of Dinorwig village and take the track past Blue Peris to descend the inclines.

Dropping quickly down, we reach the Anglesey Barracks, a long, low, slate-built accommodation block for miners. It’s now roofless and eerily beautiful, although it was uncomfortable, cold and packed to the gunwales in its time. From there, we join a spectacular narrow path zig-zagging through the spoil heaps, bounded on either side by high-packed slates. The views of Snowdon are glorious today, a contrast to the times I’ve been there when the wind slaps your face and freezes your eyelashes.

Among great cliffs of slate, 300 or so steps later, we reach the bottom, to join the crowds enjoying the Slate Museum. Visitors are mesmerised by the huge water wheel, miners splitting slate, ancient rotating machinery and the unmistakable smell of burning coal. We walk back to the cottage through the woods, past the Quarry Hospital and its gloomy morgue, a reminder of quarrying’s hazards.

Dinorwig was a highly industrialised extractive machine, run by the landowners (the Assheton Smiths of Faenol Hall) with ferocious efficiency. We see a very different landscape at Nantlle, the other side of Snowdon, where we find a perfect circular walk through the mine workings, from Nantlle village past Y Fron and Cilgwyn.

Here, where slate quarrying goes back to the 12th century, was a very different pattern of extraction. There was no grand single (English) owner, but lots of small enterprises and the slates were extracted from up to 50 separate quarries, each with its own waste tip. Nevertheless, Nantlle was one of the largest producers in Wales and as we walk we try to imagine the scale of the extraction. Getting slate to market was an issue and our track from Y Fron to Cilgwyn is on the bed of an old railway, at first horse-drawn, then steam (Snowdonia’s wonderful miniature railways all owe their origins to slate). From Cilgwyn, we descend from a group of abandoned cottages down another long footpath to a string of lakes, the water-filled remains of the diggings, and then along a trail dug deep into the landscape past Talysarn Hall; an old tramway with mysterious tunnels and bridges that returns us to Nantlle.

These are but two of the six designated areas and each is a treasure trove of mystery, human endeavour and struggle. The mines closed in the 1960s and we only now appreciate their importance: I hope we are catching people’s memories before it’s too late.

Fiona Reynolds is the author of ‘The Fight for Beauty’ and chair of the Royal Agricultural University governing council.