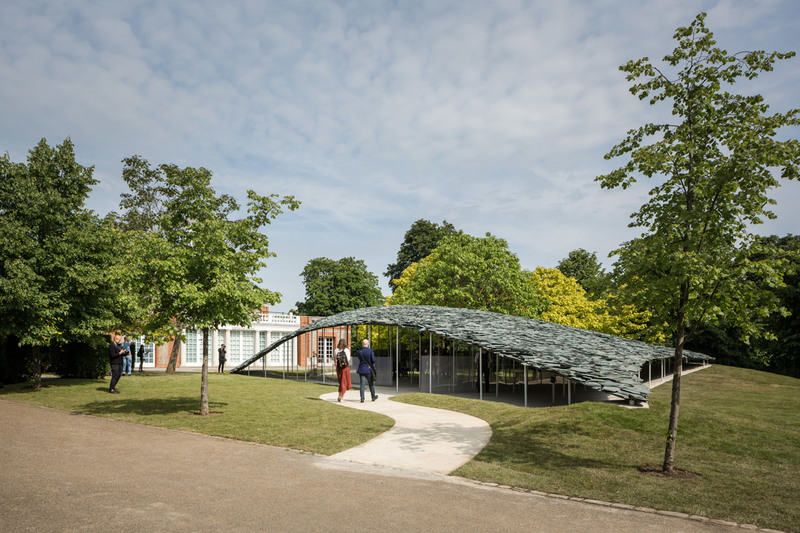 The pavilion is a 350 square-metre «cave-like refuge» covered by a slate-clad canopy that appears to grow out of the ground of the surrounding park.
The design is influenced by Ishigami’s «free-space» philosophy which seeks to create structures that mimic natural forms, a common theme in the work of his architecture studio Junya Ishigami + Associates.

«I knew that the Serpentine site is in the middle of a park so I wanted to make the architecture part of the landscape rather than making it an independent building,» Ishigami told Dezeen.

«The finished pavilion looks like a stone hill.»
Held up by 106 columns, the triangular canopy is constructed from a steel mesh grid and covered with 61 tonnes of Cumbrian slate tiles. The corners of the canopy extend down to meet the concrete surface below, with the aim of blending the structure into the landscape.

The interior space is furnished with simple metal tables and stools, designed by Ishigami to resemble lily pads, and will host a programme of events throughout the summer.ç
Ishigami was influenced by ancient building techniques for the design of the canopy.

«I decided to use stone to make this building and when I thought about the context of the Serpentine site I decided on slate,» Ishigami explained. «Also because it is a readily available British material.»
The architect chose to use irregular shaped slate tiles arranged on the canopy’s steel grid in a manner that blocks out the rain and imitates a natural terrain.

«When I thought about creating architecture as a landscape, rather than using standardised units of material I used random shapes arranged in a random manner to create something less artificial and more organic,» Ishigami explained.
While the pavilion is designed with the surrounding landscape in mind, Ishigami hopes the pavilion will spark the imagination of visitors to interpret its shape differently.

«I wanted to expand this imagery to form other connections in people’s imagination,» he said.

«At a certain moment, it might be perceived as a black bird against the sky. The roof of the pavilion becomes a pair of wings with slate feathers.»
The Serpentine Pavilion is an annual architectural pavilion installed at the Serpentine Gallery, which each year commissions an architect with the only criteria being that they have not completed a UK-based project before.