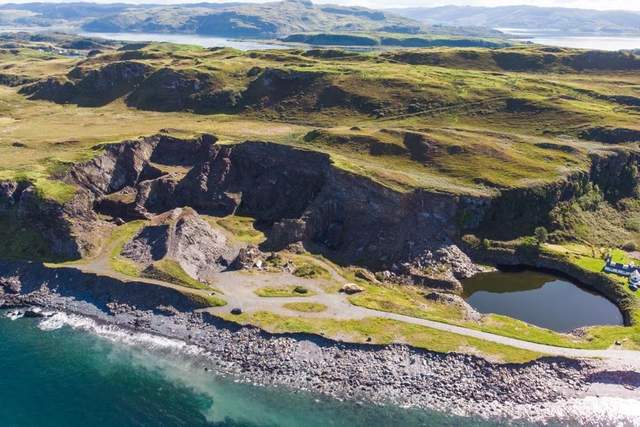 It became one of the «islands that roofed the world”.

Now, Luing in the Inner Hebrides is working to revive its lost slate industry and build a new future – while helping roof Scotland’s traditional buildings once again.

Luing, which sits to the south west of Oban, boomed with slate production in the late 19th Century, when around 600 people called the island home and 15 quarries met global demand for the high quality building material.

Today, the island population sits at around a quarter of that with the quarries now long filled with water given slate production fell away following World War Two due to a lack of labour, the arrival of cheap imported alternatives and roof tiles.

Luing is now at work trying to revive this part of it industrial past with plans to blast open a new slate bed at Cullipool quarry next winter.

In turn, it is hoped to create jobs, grow the island population and help meet a “critical” need for Scottish slate in order to restore pre-1919 buildings.

Importantly, the spoils of quarrying will be used once again on Luing to defend the beach from rising tides and increasing storm damage.

Martin Whitemore, treasurer of Isle of Luing Community Trust, said the plans were driven in part to meet the demand for Scottish slate for the restoration of older buildings.

He said: «There is an inherent demand for good quality Scottish slate.

«We have been looking behind the old quarry face and plan to open up another bed of high quality slate. «That process is quite wasteful, there is quite a considerable amount of material left behind, and with that we can maintain the beaches.”

Since no slate has been extracted since the 1960s, the original quarrying material that lined the beaches has now washed away, exposing the Atlantic- facing coastline.

“We have quite a big problem with coastal erosion and last year Storm Aden did quite a lot of damage to our beach defences,” Mr Whitemore said.

He added: «It’s a natural product, it is right here on the island and is saves shipping in from Spain or Brazil. Also, it gives the island and income and that enables us to develop the island further to make it more attractive to people, particularly to younger families.”

The trust has been working with Historic Environment Scotland on its proposals, with a development officer now being sought to drive this new era of slate production.

The trust is working on moving its proposals through the planning system, with hopes to start quarrying in the winter of 2024.

he Historic Environment Advisory Council for Scotland has described Scottish slate as “the most critical area in the supply of traditional materials” with a new supply an “immediate priority”.

Graham Briggs, project manager for skills and materials at Historic Environment Scotland, has been working with the trust on the island slate revival.

He said: “Establishing a new slate industry would not only create material for our historic built environment, but it could also create material to help the island mange the impacts of climate change and the issue of coastal erosion which threatens the village of Cullipool.”

Luing is one of a number of slate islands in the Inner Hebrides, with others including Seil, Easdale and Belnahua.