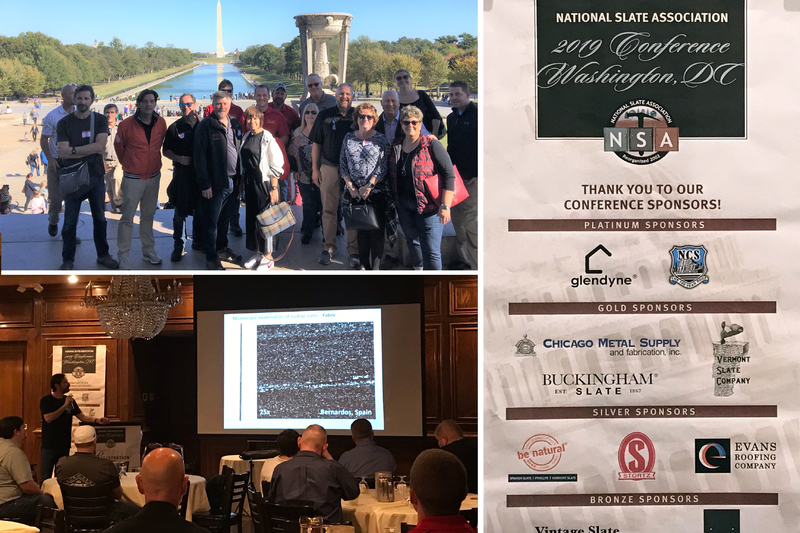 One more year, be natural® has been proud to sponsor the NSA Conference (National Slate Association) that took place in Washington DC in October 24-27.

After registration at the Embassy Suites in Chevy Chase, the group boarded a bus to do some sightseeing in Washington DC. Julie Butler hosted a walking tour that took everyone around the National Mall. The group parted ways at noon where some went back to Chevy Chase on a slate roof walking tour while the rest of the group saw the White House and Lincoln Memorial.

The second day was the Presentations @ Maggianos. Maggiano’s played the host to the NSA conference and the establishment was first class. Presenters for the day were Victor Cardenes (Ph.D in Geology), Reid Ribble (CEO of the NRCA), Gary Howes (1st Place Award @ IFD), Nick Sabino (Chariman of NRCA), Ski Wysocki (Chicago Metal Supply), and Trent Cotney (Cotney Construction Law). The day wrapped up with a membership meeting where the board updated members about ongoing projects such as the NSA videos and updating slate standards.

Beacon Roofing Supply / Roof Center on River Rd in Bethesda was a fantastic host for the 3rd day. The NSA was welcomed in by Paul & Rebecca Evans. Presenters for the day were Victor Cardenes, Bill Wilkins (Pointivo), John Chan & Gary Howes (Durable Slate), and Tom Stortz (John Stortz & Son). Mock ups were worked on throughout the day by a crew from Durable Slate, Tommy Eban from Wuko & John Sheridan.

It was great to meet new faces and to catch up with long time friends. These conferences bond the industry together and keep everyone towards a common goal of growing the natural slate organization.