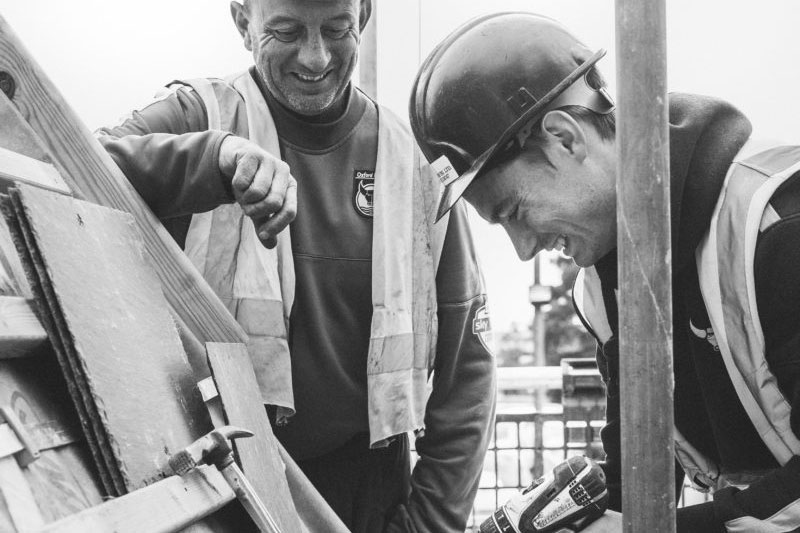 Coal Drops Yard was once where London received delivery of its coal. In less than a year, a unique new shopping destination will rise from the ashes of this long-unused industrial area. Photographer Jonathan Donovan meets the father and son roofing team helping it take shape in unexpected ways

Designed by the Heatherwick Studio, Coal Drops Yard features a remarkable roof that looks like it’s being peeled off the original brick-built Victorian walls below. This structure is currently being completely covered in the original roofing material — the finest Dark Blue Grey Slate from Cwt-y-Bugail Slate quarry in North Wales. In a satisfyingly authentic move, the brand new roof of over 80,000 slates is being drawn from exactly the same seam as the original roof was more than 150 years ago.

Among the many expert contractors and builders creating this landmark for London are a father and son slating team, unique amongst their peers for one very particular and rare reason — they are both left-handed.

Richard Sallis has been roofing for 34 years and his son, Luke, for five. That they are related is not especially rare, as many roofing teams are father and son, but the fact they are both left-handed is and has a great impact on their work. Depending on which way the slates are flowing along the roof — and in the case of Coal Drops Yard, this is especially important — the work is much easier to do if you’re left-handed. Richard explains that when you’re roofing the “wrong way” you’re twisting on yourself all day long and, while he might not admit it, more than a few days slating the wrong way can be completely debilitating and result in long-term injury. Explaining this on some projects can be tricky, as Richard says, “On some jobs people ask us, ‘Can you start slating now?’ and we’ll say no, because it’s the wrong way. They look at us as if we’re speaking Double Dutch.”

Double Dutch aside, the availability of left-handed roofers is roughly the same as left-handed people in the general population, so they are valued for the efficiency they can bring to roofing in a certain direction. At the time of writing, the straight sections of Coal Drops Yard are complete and the curved section of roof lies ahead. “It’s been very interesting to work on Coal Drops Yard,” Richard says, “and I’m looking forward to doing the ‘roller coaster’ roof”.

Richard and Luke are in complete agreement when they both say, “it’s everything but straight” and are clearly in awe of the structure in front of them. The pair are part of a tight team who have also worked on the German Gymnasium and the Fish and Coal building, but Coal Drops Yard, as Richard observes, is something special— “I’ve never seen anything like it in my 34 years of roofing.”

You get a sense from both these men that they have a great respect for the material they work with. Richard again, “(With) Welsh Slate, you can more or less lay every slate; there’s no wastage and you don’t pick a load of slates up and then have to sort through them. You can lay almost every one of them somewhere on the roof.”

They’re quietly proud of the work they do, and both will be visiting King’s Cross once the job is over, bringing family and friends to see their contribution to the project. What does it take to work with someone you are so closely related to? It’s not hard, according to Richard. “He’s still learning, I keep him right. We don’t live together — that’s our break.” For Luke, working with dad requires a sense of humour: “Work-wise you just get on with it and get it done, but you also need to be able to share a joke. Dad’s not too serious. You can have a joke and a laugh but when you’ve got to do the work, you’ve got to do the work.”