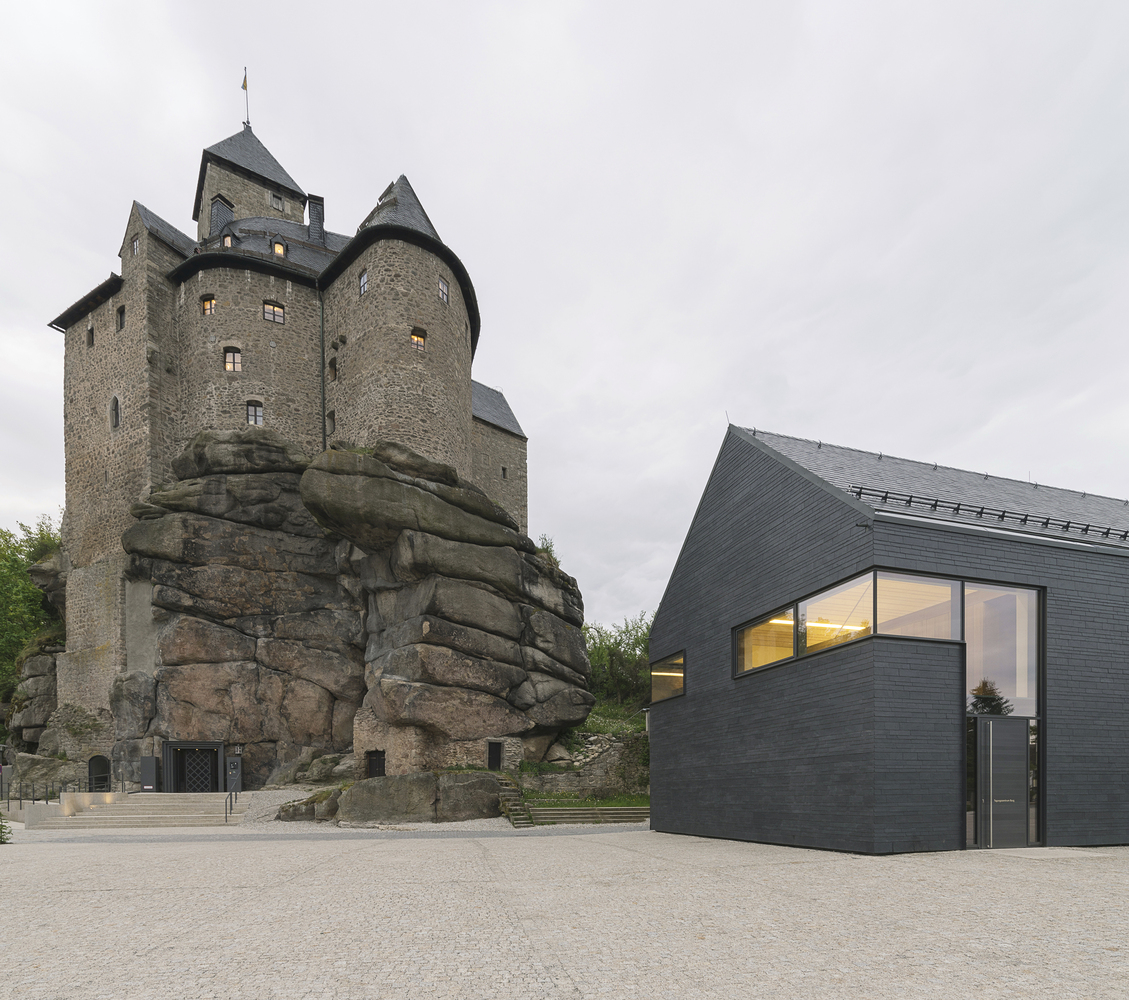 Text description provided by the architects. By the beginning of the 20th century, mere ruins of the majestic and historically multifarious Falkenberg castle complex, firmly situated on a throne of powerful slabs of granite rocks above the Waldnaab, remain. The castle, which was first mentioned in a document in 1154, owes its present form to Friedrich Werner Count von der Schulenburg, who had it rebuilt and extended with historical building materials. The count was a diplomat in the service of the German Empire and ambassador in Moscow from 1934 to the declaration of war in 1941. His wish to have the castle remodelled as his residence remained unfulfilled. A member of the resistance, he was executed on 10 November 1944 in Plötzensee in connection with the Stauffenberg assassination on 20 July 1944. The Falkenberg Castle is a historic landmark of structural and cultural national significance. Its history as a building block, the extraordinary contribution of the ambassador and his successors, as well as the bold decision of the mayor and the local council, laid the groundwork for the transformation and resurrection of this impressive castle complex. Their efforts helped revive this once-old castle into an enduring symbol of culture. For us as architects, the most wonderful moments are those in which design materialises into a real living space that is animated with and embraced by the heart and soul of the people who inhabit it. Intarsia in stone is the embodiment of our architectural concept. The castle has retained its distinctive outer appearance. The available material has been gently transformed into an architectural form that, while contemporary and technically sustainable, still demonstrates all due respect to history. The old atmosphere of the castle has remained tangibly preserved. Out of a multitude of valuable, precisely joined individual parts, a greater whole has re-emerged. Simple materials, impressive, well-tempered walls that have been polished with only chalk, slates, wood in its most varied facets, and the ubiquitous natural stone imbue the rooms with their own individual soul. The light is an integral part of the rooms. The views from the windows of the castle and conference centre reveal houses that engage in a dialogue, not just with the past, present, and future, but with Falkenberg itself and the people who inhabit it. The result is a series of one-of-a-kind venues. A path forged into the rocks, a castle courtyard with space for individuals, hallways, and bridges, all of which tell their own stories, rooms pointing in all directions, each with their own unique intarsia, rooms with an open chimney fire and seats in the walls, and a museum teeming with life and memories. The rooms are perceptibly unfettered and resign themselves to a new, coherent identity, without forgetting the past. Quite on the contrary – an informative tour through the cultural castle awaits the visitors, who enter the castle complex from above via the old bridge or from the village via the new, barrier-free lift and stairway system inside the cliff. Four floors provide an illuminating glance into the thousand-year history of the castle and the new museum elucidates the exciting life of Count von der Schulenburg. What’s more, the castle and the conference centre house various event and conference rooms, which accommodate up to 120 people with state-of-the-art technology and infrastructure, as well as a museum café, a beer garden, and eight double bedrooms.