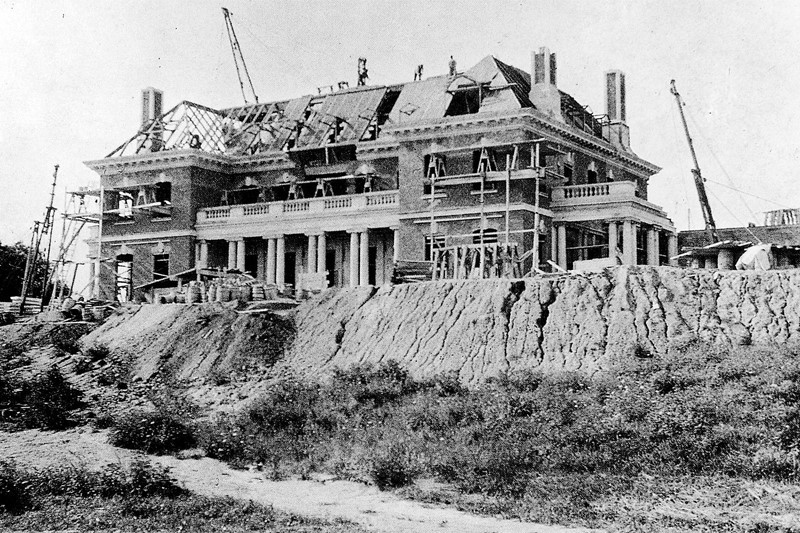 To make repairs, Westbury House on Long Island needed a supply of Collyweston slate, but all of the mines had closed decades earlier. Then one reopened.

Nobody ever said that New York was a movable feast, but one rich family did its best to make it one a century ago by packing up an entire, sumptuous Fifth Avenue dining room and reassembling it in the country.

In 1927, shortly before the demolition of the steel magnate Henry Phipps’s marble Renaissance mansion at 87th Street, his eldest son, John S. Phipps, salvaged its dining room’s ceiling and paneling and brought them under the roof of his grand home in Old Westbury, a colony of millionaires on Long Island.

That dining room — now featuring a family portrait by John Singer Sargent — has been a major attraction ever since in the Georgian Revival manse on the Phipps estate, which has been open to the public as Old Westbury Gardens since 1959.

But the English slate roof that shelters the room and 22 others has been a beautiful headache ever since it was installed in 1905. By 2005, the slates were in such gross disrepair that a British consultant diagnosed them in terms worthy of a medical examiner.

“He declared our roof ‘perished,’” said Lorraine Gilligan, the gardens’ director of preservation.

Restoring the roof with historically appropriate new material seemed impossible, however, until recently — when the world’s only mine producing its distinctive limestone slate reopened for the first time in half a century.

Westbury House boasts what experts believe is the only roof in the United States made of Collyweston slate, a singular material prized for centuries in England for its hardiness and for the distinctive golden yellow it turns with oxygen exposure. The slate was long employed on farmhouses and manor houses throughout Britain, as well as at Cambridge and Oxford universities.

How Westbury House came to be topped by a British stone so alien to America is a trans-Atlantic tale of successes and failures, of fabulously wealthy heirs and hardworking laborers. And the story has come full circle this year, as one of the Englishmen installing the replacement roof is the great-great-grandson of a slater who sailed from Britain in 1905 to consult on the original roof.