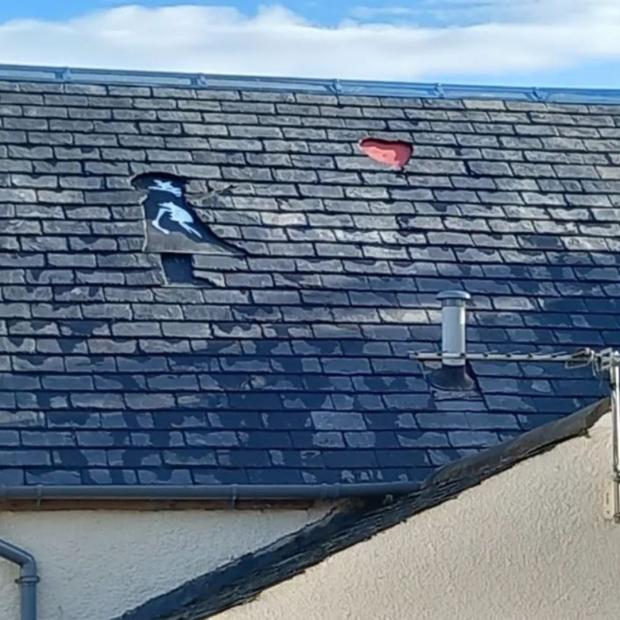 Gary McIntyre says his artwork, which he says are like ‘nothing ever seen before around the world,’ are the reason he scooped a top award at a recent UK roofing awards.

The Faifley-born roofer, who has lived in the Highlands for the past 12 years, revealed he has even recreated his favourite artist Banksy’s artwork into roof slates alongside outlines of stag heads and other designs.

And speaking to the Post, Gary explained it all started when the owner of a building he was working on agreed to let him try something new out. Gary embedded a fisherman catching a salmon into the roof (Image: Gary McIntyre)

He said: “My colleague and I were reslating a belltower with a flat panel on the front of it that looks onto the pier.

“You have to access this estate by boat, and I approached the owner.

“I had an idea of the led stag in my head, I’ve always been quite imaginative, but they couldn’t let me do it as it was a listed building.”

But the concept was now planted in Gary’s head and on his next job, working on a 14th-century cottage, this time the owner gave him permission to try it out.

“Once I put the stag head in, he (the owner) told me a story.

“The cottage has been in his family for over 100 years, and 100 years ago his family had a name for being pretty notorious poachers.

“The Lairds that owned the cottage turned up on a Friday and said to them, ‘the locals and myself are sick of your ways, we want you out by Monday. But I’m not an unreasonable man and I’ll let you buy the cottage for £100.’

“So, all the family went up to the hills that weekend, poached £100 worth of stag, sold it at Inverness black market, and bought the cottage of the Laird.

“And then I turn up more than 120 years later and offer to put this stag in without knowing anything about the history of the place.

“It was like it was meant to be; it was the perfect property for it.”

After that, Gary received a lot of attention for the design after posting it on his Instagram and his work being shared on various roofing social media groups.

He was asked to design a fisherman and salmon for a roof for an estate that sat close to a loch and things continued to snowball.

“I’ve had quite a bit of attention from around the world.” He added.

“I had the director of the Master School of Slaters in Cologne contacted me and asked me if I wanted to do one of their courses at any time that I wanted.

“There’s usually a four-year waiting list for them, but he said that he’s never seen anything like it in all his years of roofing. The stag was the first design Gary placed on a roof (Image: Gary McIntyre)

“So yeah, it’s a totally original idea and I can’t believe someone hasn’t come up with it before myself.”

Last week, Gary was recognised for his creativity at the UK Pitched Roofing Awards in Manchester, picking up the Best Use of Natural Slate on a Domestic Project, an award he insists he was ‘humbled’ to win. Gary scooped an award for his designs at a recent awards (Image: Gary McIntyre)

Regarding his Banksy design, Gary admits that one is his personal favourite.

“I was approached to do a roof by a guy. I asked him if he would be interested in letting me put a Banksy on his roof.

“He said, ‘yeah, what one are you thinking?’

“I told him the Little Girl and the Red Balloon and he told me that was his wife’s favourite Banksy. So it was really good.”