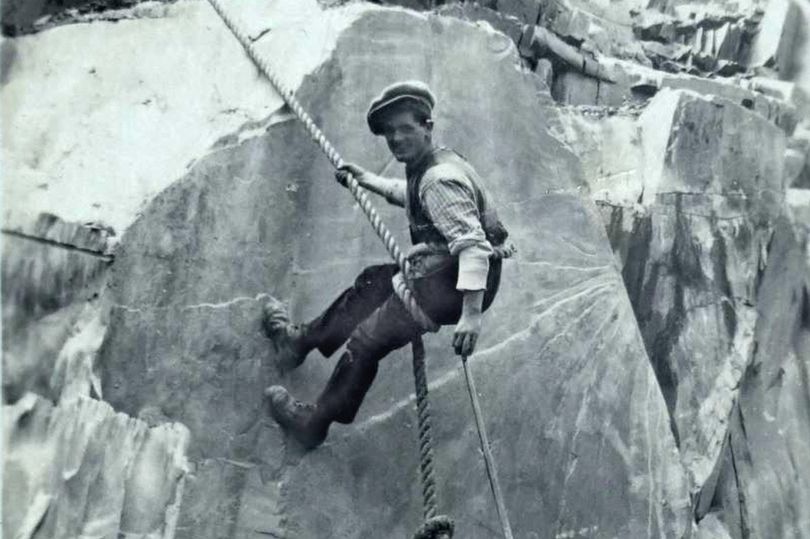 A ‘passion project’ film has been made about the incredible men who often endured atrocious working conditions in the quarries of North Wales.

The slate quarrymen of North Wales roofed the world while often working in often appalling conditions. Respite of a sort could be found in the “Caban”, a room in the quarries where they would gather together to eat, sing, elect a daily president and discuss gripes, religion and politics.

In this respect they share a culture with some of the world’s most remote tribes, from the Amazon to New Guinea. That’s according to a documentary maker who has visited many of these places and has been struck by the apparent similarities between their communities.

Steve Robinson made BBC’s acclaimed Tribe series with ex-Royal Marine Bruce Parry, and later filmed the Mekong River in Southeast Asia with Sue Perkins. His latest cultural foray was a film he directed about the National Slate Museum in Llanberis, Gwynedd.

The programme opened the new series of Inside Museums on BBC4, and is now available on iPlayer. The timing couldn’t have been better – the National Slate Museum is celebrating its 50th anniversary this year and the Slate Landscape of Northwest Wales was recently granted World Heritage Status by UNESCO.

Steve, from Swansea, said: “The slate industry of North Wales isn’t as well known as the coal mines in South Wales but there’s a unique culture there centred round the Caban, the cabin where the men would eat together. It became a place of learning, debate, poetry and song – a place where working men came together to share their culture.

“There’s something very tribal about it. I’ve worked all over the world and lots of the tribes we visited had men’s huts where the men would gather for singing, dancing and talking – just like the Caban.” The museum lies in the shadow of the huge Dinorwic Quarry, alongside Llyn Padarn. Llanberis Lake Railway now carries visitors rather than the slate it once hauled down to Port Dinorwic, now Y Felinheli.

As well as workshops, the museum complex includes a row of quarrymen’s houses, transported there from Blaenau Ffestiniog and rebuilt with the décor, furniture and fittings of 1860, 1901 and 1969.

The half-hour long film was produced by Caernarfon-based TV company Cwmni Da. Of the seven-strong team who made the programme, three have their roots in the slate industry.

Among them was managing director Llion Iwan whose grandfather, John Morgan Thomas, worked at the giant Penrhyn Quarry. His heirlooms were used for the show, presented by BBC Radio 6 DJ Huw Stephens.

They included old photographs of quarrymen at work. He also has a list, painstakingly copied from the original by his grandfather, of all 474 men killed in accidents at the Penrhyn Quarry between 1784 and 1965.

Llion said the film was a “passion project” for Cwmni Da staff, many of whom are descendants of families who worked at the slate quarries. He said: “I have a huge pile of photos going back to the 1890s taken at various quarries in the area.

“When you see your grandfather aged 16 in a picture of a group of boys in the quarry, it does strike you how hard life was for them. We were keen to share the story about the quarrying community and what they endured – but also the positive elements, their self-reliance and the social aspects of their lives.”

Llion was 19 when his grandfather passed away. John Morgan Thomas, from Mynydd Llandygai, began working in Penrhyn Quarry at the age of 14, attending night school in nearby Bethesda.

Later he joined a book club, collecting books on history and international politics. Llion was struck by just how important this was to him despite the harsh conditions he endured. Huw Stephens was taught how to split slates by John-Joe Jones, a time-served craftsman at the National Slate Museum

He said: “I remember he couldn’t walk far because his lungs were affected by silicosis from the slate dust. Among his papers there was a ledger he had copied out with the names of all the men who had died at the quarry – their ages, addresses and what had killed them. The youngest was only 16.”

Presenter Huw Stephens knew nothing of slate quarrying before filming began. He was shown the inside track by John-Joe Jones from Deiniolen, a sixth-generation quarryman who now works at the museum, and who taught him how to split slates.

Huw was touched by the experience. He said: “The story of slate and the people who quarried it is just mind-blowing and the museum tells it really well.

“The most surprising thing was how closely-knit those communities were. Their entire life revolved around the quarries, their villages were only there, halfway up a mountain, because of the quarries.”